Of Cars and Easter 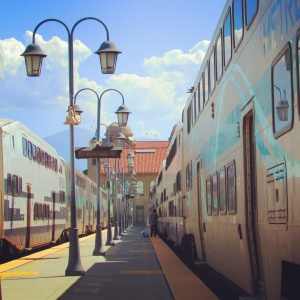 Brian’s car died last week with a slow whimper.  It won’t go faster than 40 mph, and that’s no good for commuting on the California freeways, even if it wasn’t making that horrible sound between a rumbling and a wheeze.  We bought Brian his car specifically because it’s big enough for him.  He’s 6’5, and has to fold himself into my little compact car.  He gets knee and ankle problems when he has to drive it too much.  This means that I’m the designated chauffeur for both directions of commute.

It’s been nice and it’s been annoying, both.  I like leaving the house with him, trying and always failing to be ready at the same time, and driving along the roads in the quiet morning with my hand on his knee.  I like watching him lean over the railing of the pass that goes over the train in his dark trilby and tie, and seeing his face light up, his hand waving, when he finds my spot in the car in the lot.  Sometimes there are impromptu adventures like the when he suggested we go to the graveyard you can see from the train.  There is a marble serpent in that graveyard, swimming in green grass, and a few mausoleums.  I kept looking for Bod and Silas inside.  But I think their graveyard was a New England graveyard, not a California one.

The drawbacks are that it’s a whole hour earlier than I would need to get up if I were only responsible for getting myself to the office on time.  And although it’s only a few more minutes to zip down the 215 at the end of the day to the Riverside train station, it is just long enough that I get that twinge in my shoulder, that crease between my eyes, and that little bud of impatience in my chest.

I used to tease Brian when we commuted down to Orange County every day together that it was 3 hours of “forced alone time” with his wife.  But I forgot how great that time with no distractions can be.  I missed it, and I’m glad to have it back.  Even at the cost of some of my patience.

We had a lovely Easter this week.  By some miracle, I didn’t over-commit to bringing a thousand things.  I had a very nice Saturday trapped at home while Brian took the car to do some overtime at work.  I made pies with crust from scratch and generally loafed around with the cats.  Sunday morning, we left the house at 9:00 am, visited all the families, and got home about 9:00 pm when we fell into bed.  I had a great excuse to wear my vintage pin of a bouquet of pink flowers and my peter-pan collar shirt.

Highlights of Easter:  Brian attempted to force everyone to play Love Letter with him until my sister’s fellow finally trounced him at it for good (I’m kidding about the “forced,” they had quite a rivalry going).  At my grandfather’s house, twelve grown adults roamed the bushes and fought over bright plastic eggs to find the gold one (which was filled with an extra-fancy scratcher.  My dad found it).    At my mother’s house, she cut the heads off hollow chocolate bunnies to put port inside them… fortunately, she spilled the reddish port all over the place and it looked like some horrible bunny massacre.  A tasty, tasty massacre.

I expect this week to be rather sleepy.  Brian and I are still working our way through the edits on my novel.  I’ve started to draft out the sequel.  Tomatomania is coming to the Botanic Gardens next weekend, so I will have to put some attention into compost, watering strategies, and planting.  A large amount of my time is probably going to be spent keeping cats out of Easter candy, because Jennyanydots is way more devious and crafty than the other two ever have been.   With all of that, and with my duties driving Brian around, let’s hope it all continues as quiet as it’s started.