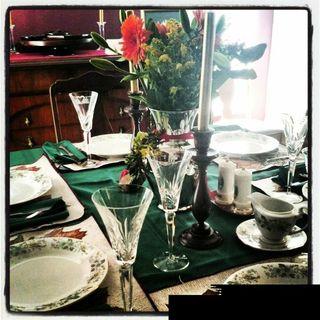 This weekend has mostly been a confluence of crazy events and family.  My father, a teacher, set out on his motorcycle two weeks ago and hasn’t been back.  We usually have breakfast every Saturday morning.  He texted me this week to say that he’s east of the Mississippi.  Must be nice to just pick up and go like that.  Hop on the back of a bike with the wind in your hair and see the country.

Brian’s mom put on a fabulous Thanksgiving in August for us on Saturday.  His sister Julie is here from Virginia, a rare occurrence.  There was a turkey in the freezer.  It really was kismet.  Brian and I brought the Martinelli’s and tried to stay out of their way in the small kitchen.  I brought my knitting and my ukulele, and played while Brian sang LP’s “Into the Wild” for Julie, who had never heard it but loved it.  We went home with many leftovers.  I ate almond green beans and potatoes with gravy most of the weekend.

I had a job interview scheduled for Monday, and very faded red hair with atrocious roots.  Cue the other sister, mine, who helped me navigate through the complicated world of box dye.  It was much easier than we thought it would be, although it’s a miracle that no one passed out from the toxic fumes.  It still lingers in the bathroom.  I ruined the towel I accidentally stole from Yosemite a month ago.  It is streaked brownish red.

“So not only are you a thief, you’re also a vandal?” said Brian.

My mother gets back from Maine tonight.  We’re picking her up at the Long Beach airport.  Julie flies out early Thursday morning and she’s bunking at our house Wednesday night.  We’re having beef roll-ups for dinner.

That’s all.  It’s been a crazy week of comings and goings and family.  I’ve taken a hiatus on writing because I’m making an afghan for a non-blood related family member.  I expect to start draft 3 on the 26th.  In the mean time I’m hooking furiously while listening to much bad TV, and some good TV.  I recommend Netflix’s “Orange and Black.”