In case you haven’t guessed it yet, this is a fairly political blog post.  You can skip if you’re not into that kind of thing.  Also contains rampant feminism. 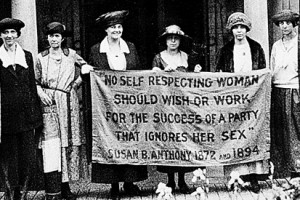 I am marching in Los Angeles tomorrow.  I don’t own any feminist t-shirts or anything, so I plan to wear my Suffragette white with the purple and green pin I made for election day.  I have a banner, too, if I ever manage to finish it.  It will say “No woman should wish or work for the success of a party that ignores her sex,” in as close a copy as I can get to the 1920s picture.  It will be fabric, too, for easy transport on the train.

I have had a lot of – well, not exactly fights.  Heated discussions? – with Trump supporters who claim that there was a HUGE backlash against him when he said he wouldn’t accept the results of the election, and now those same people won’t accept the results of the election themselves.  And that it’s stupid to go and protest.  What are we even protesting?

So I thought, since I think better with my fingers than my mouth, that I would explain why I’m marching tomorrow.  And that’s the first thing I want to emphasize.  I’m not protesting anything.  I’m marching in solidarity with the women in my community.

The reason is this:

Humans of New York went to Detroit and talked to a bunch of people there after the election.  The one that struck me the most was posted on November 20, with a woman in a green anorak looking out at a river.  The quote above the picture was this: “I’ve had friends reach out to me. They’ve told me: ‘I understand the reasons that you’re upset. But those aren’t the reasons I voted for him.’ And I’m just starting to understand that. I’m realizing that a lot of people wanted change more than they wanted kids not to cry. We all have our own code of ethics. My bottom line happened to be tolerance. Their bottom line was abortion. Or the Supreme Court. I guess we all have the right to choose our own bottom line.”

I was desperately aggrieved when Trump won, and part of it is because of what that lady in the green jacket said.  My right as a woman to exist safely in a public place was not the bottom line for many people.  The fact that Trump assaulted women and then bragged about it was not enough to disqualify him for them. They wanted change more than they wanted women to not be molested. That’s certainly their right to choose.  I don’t dispute that.  But the fact that my safety comes second to anything at all, and that there are a LOT of people who feel that way, feels like a death.  A death of progress, a death of protection from indecency, a death of the esteem I held for those people who I believed better of.

At the heart of it, that’s really why I’m marching.  I’m marching with women who are my friends and relatives to show them that I value their safety as MY bottom line. that we will stubbornly value each other together.  And I’m marching to say to Trump and everyone in his new administration that comments they have made in the past are unacceptable.  If they try and take my safety away from me or those in my community (regardless of gender, orientation, or color),  this is the polite version of what they can expect the future to look like.

I’m not protesting the election.  I’m not trying to say that Trump is not my president.  I’m trying to acknowledge that he IS the president, for better or worse, and that we now have to strive every day to hold him to the standards we expect of someone in that office, no matter how difficult or impossible that seems.

I’m marching because it gives me something to do with this grief, and it gives me hope that we are a people who are, collectively, better than our current government.

To everyone else who is going tomorrow: I look forward to seeing you there.

And to those of you who feel you must skip out: I respect that, and I hope that if things get harrier you will consider standing with us next time.

On Politics, Action, and Protests 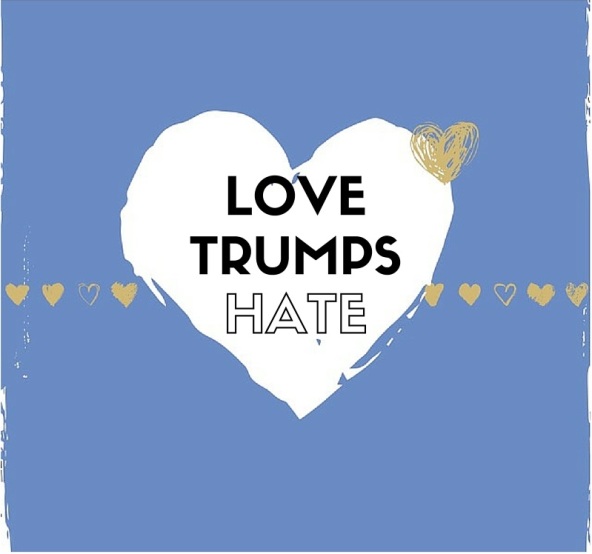 I thought that I would eventually do a post about Trump winning the election, and then the idea that I would actually have to talk seriously about this man sickened me.  And then I realized that is exactly why I need to write the post anyway.

I’m not going to proselytize.  Maybe Trump will be fine.  But it’s been less than a week and he’s already appointing white supremacists to key positions, and climate skeptics to lead the EPA, so I’m not terribly optimistic.  But you know I’m about doing and not about talking.

We’re in a society now where it’s IMPERITIVE that you act against racism. It’s no longer enough to be against it without acting. If you are for safe spaces, if you want to wear a safety pin and mean it, then you are responsible for creating those safe spaces around yourself with action, not just with clothing.

First, here’s a Southern Poverty Law Center article on confronting racism with the people you love: https://www.splcenter.org/20150126/speak-responding-everyday-bigotry.  Take-aways for non-confrontational people like me?  Recruit allies to help you confront rampantly racist family members if necessary; it’s okay to tell them that racist language is hurting your relationship, and it’s because you love them that you want them to stop when you’re around.  Leave the room when those subjects come up, or seriously ask the joke teller to explain why the joke is funny to them; indicate politely that you aren’t amused.  Repeat back sentences without using racial epithets yourself (“the Mexican cashier,” becomes “the cashier,” for instance).

Second, I’ve posted a comic below drawn by Maeril (@itsmaeril) on how to confront islamophobic harassment.  But it’s good for all kinds of harassment, really.  Use liberally. 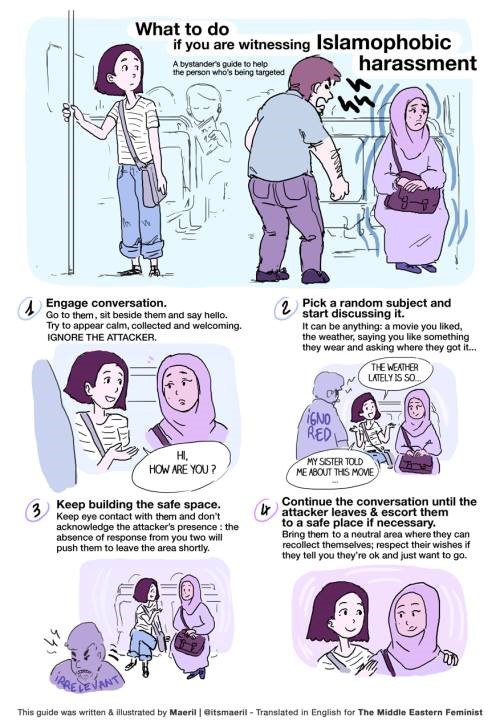 Third, consider what outside organizations you can support that will need help, or will be giving others help.  I don’t know how to bring a lawsuit against Trump if he starts putting some of his unconstitutional practices into action.  But the ACLU sure does, and they’ve already put Trump on notice that they’re watching.  I’m giving $10 a month.  An aunt of mine is giving a little more to Planned Parenthood this year.  Several friends have invested in legitimate well-run news sites like NPR or the Washington Post.  Do what you can where you see the need.  Every little bit helps.  And if you can’t donate money, consider donating your time.

The next two things I want to share are for others.  I’m already getting a lot of crap from friends  and family about the protests that are still going on.  This is why protesting isn’t just people being sore losers, and why we all shouldn’t just “get over it already.”  Moche Kasher says it better than I ever could: 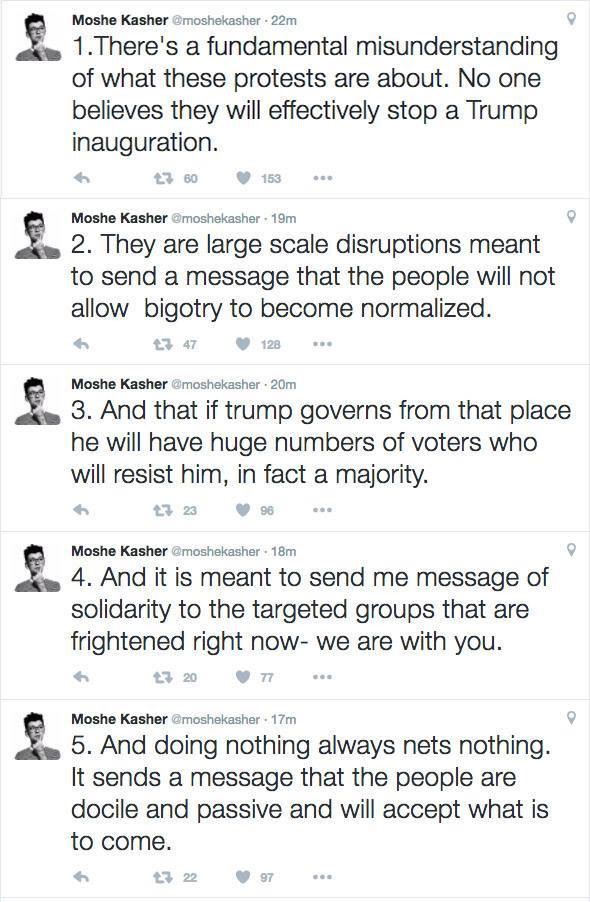 And I want to end on this quote:

“The President is merely the most important among a large number of public servants. He should be supported or opposed exactly to the degree which is warranted by his good conduct or bad conduct, his efficiency or inefficiency in rendering loyal, able, and disinterested service to the nation as a whole. Therefore it is absolutely necessary that there should be full liberty to tell the truth about his acts, and this means that it is exactly as necessary to blame him when he does wrong as to praise him when he does right. Any other attitude in an American citizen is both base and servile. To announce that there must be no criticism of the President, or that we are to stand by the President, right or wrong, is not only unpatriotic and servile, but is morally treasonable to the American public. Nothing but the truth should be spoken about him or any one else. But it is even more important to tell the truth, pleasant or unpleasant, about him than about any one else.” – Theodore Roosevelt
Reminder: we overthrew the government over 200 years ago so we would never have to stomach a shitty king again.  Good luck with the acting for justice (I know I’m going to need it, for one).  It’s going to be hard.  But if we can even be a little bit better than we were yesterday, that’s progress in fighting the spirit of awfulness that’s attempting a coup on the country right now. 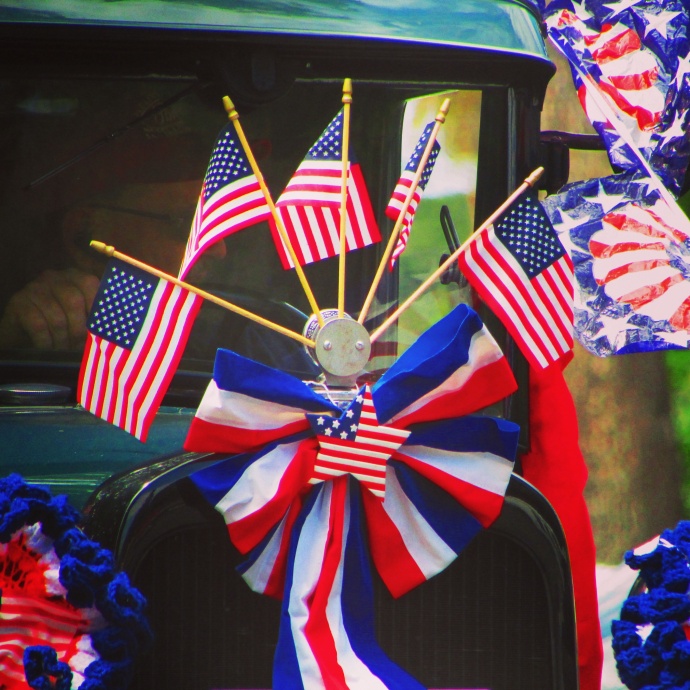 I’m writing again today to talk to you about something VERY important, and that’s your vote.  Wait – don’t click away yet.  I’m not gonna launch into any spiels about the presidential candidates.  At this point, I think you’ve probably made up your mind about those two folks.  I’m hearing from a lot of people, though, that because both Clinton and Trump are terrible, they’re just not going to vote at all.  That’s what I’d like to talk about today.

Here’s why: Elections are SO important, and arguably it’s the stuff happening in your state that is way more important to your daily life than whoever is currently shouting mean things on the TV about Washington.  I can’t speak for other states, but California is electing a new congresswoman for the first time in almost 25 years; the legislature is asking if they should pursue a repeal of Citizen’s United; and there are three (or more, if you want to count the legalization of marijuana one in there) propositions that will decide what our penal systems look like for the next decade or more.  That stuff is something you should weigh in on, that will impact you directly.

And, guess what?  You don’t have to vote for or against everything on your ballot.  Don’t like Hilary and don’t like Trump?  Leave the presidential question blank and vote wholeheartedly and gleefully for your senate candidate.  Don’t care at all about plastic bags?  Leave that one blank too.  It’s okay to vote for some things and not other things.

For example (I don’t want to tell you who to vote for or anything, but…) I’m a HUGE fan of Pete Aguilar, my state congressman.  He runs job fairs all over the place, supports Planned Parenthood, has written a lot of laws that help small local businesses, and sent me a very nice letter after I contacted him about gun control.  I mean, his mom helps him campaign.  I can fill the dot in next to his name without doom and gloom feelings that I’m picking the lesser of two evils.  I genuinely am so glad that man represents me.

There’s something to be excited about in this election.  Maybe it’s not the top of the ticket, but it’s not buried that far down.  I promise.

You still have the whole weekend to look at everything and make a decision on how you feel.  I urge you to at least give it a trial.  League of Women Voters and NPR both have non-partisan information on propositions and candidates if you just put in your address, which I always find is a good place to start.  Your work is required to give you time off to get to a polling place near you.  You can do this.  I believe in you.

And thank you.  This whole ‘having a democratic country’ thing works much better when all of us are participating.