I don’t know if you have ever been to Plymouth, Massachusetts, but it seems like much of the East Coast at first glance.  There is a gray quality to the light that makes the beaches blander, the seas bluer, the greens more vibrant.  Unless you are in a formal town and there are slim granite curbs, the roads are all rimmed by gravel and scrubby grass that collects spindly wildflowers and clover.  The trees beyond the green strip all mound together into a heap of foliage that follows next to you as you drive.  Tucked between the trees are clapboard houses with shutters.  They’re boxy and white, or maybe there’s a wide porch with a blue roof, or a tin star tacked to the siding.  All of them have shutters, new and old.  The beachfront in Plymouth is busy and modern.  There’s an ice cream store with a teal marquee and gold gilded letters.  Pilgrim Gifts hugs the triangle-shaped corner.  A granite pavilion houses a small, disappointing rock that says 1620, and out in the bay stands the medium sized Mayflower II.  The shore stretches, flat, brown and blue, to the horizon.

It’s beautiful.  And it makes me think of winter snows and a shallop speeding through the waters, everything unknown.  But it’s not any different than any other seaside town boasting a historic item or two, really.  Not unless you know the history of the place. Not until you step into the museum that is a recreation of the village as it was in 1627; Plimoth Plantation.

There are places you go to that steal your soul and you never belong to yourself again.  Places you’ve dreamed, somehow, or maybe it’s just that the air is in your blood in a certain way.  But all you need is one whiff and you’re home, the angst in your soul is quiet, all is right with the world.  Maybe they have nothing to do with you before this moment, but it doesn’t matter.

Plimoth Plantation is that place for me.  The gray houses, their roofs thatched, seem to grow out of the scrubby kitchen gardens that are rimmed by uneven gray fencing.  A dirt path stretches down to the ocean, which is ever more blue than you remember it.  At the top of a hill is a boxy fort housing cannons and also the church, the inside dim, broken up only by a few slim windows.  The village smells of wood smoke even on the hottest day.  Inside the houses, people in bright period garb will speak with you in a foreign accent about everything from religion, to thatching a roof, to their opinions of their neighbor.

There is always something that doesn’t quite dawn on you that comes out in these encounters.  Most people know that the pilgrims landed far north of where they were supposed to.  What struck me this time was the woman who lamented that most of the Mayflower crew had died, and if the ship couldn’t get back to England then their supply ships would never come to the right place.  At best they would be declared lost at sea.  At worst they would all starve in a wilderness that had already claimed half of them and looked to claim more when their wheat wouldn’t grow properly like it did at home.  This was before Squanto and Samoset.

Or the gentleman who had relied on the advice of a few summer fishermen who touted the mild and warm climate in New England, always home before the fall frosts set in.  He had not brought a winter coat over, and his neighbor charged him a fortune for an extra one.  Because no one knew what the winter was like.

Chickens roam in the streets and attempt to forage in the houses if someone doesn’t kick them out.  There are reddish bulls in the far pasture.  Unless the task is a dangerous or fiddly one, you will likely be asked to help hoe the garden or tie knots in the fishing rope.  The words in the bible all have an “s” that sometimes looks like an “f.”  Their earthenware cups have too many handles.

I hadn’t been for, oh, probably 15 years.  But I got to go again this summer.  It’s just as much mine as it ever was.  It’s a better experience than I remembered.  I wished again, for the millionth time, that I could move in and stay in that blue and gray world forever.  I ate authentic food, reveled in the green streets, asked questions on horn books, thatch, wood storage, and religion just to hear the answers.  Brian helped Patience Brewster hoe a row in her garden. I wished all over again that I could don those clothes and pretend to be a pilgrim for a year, even if I did have to go home at night.

But it was back on a plane for me, and I’m now residing in the golden dryness that is California again.  I hope I can get back there sooner than 15 years next time.

And in the meantime, I’ve pulled out some of my pilgrim books again.  First on the docket?  A collection of primary source writings called “The American Puritans, their Prose and Poetry.”

I’m also enjoying all the pictures I took: 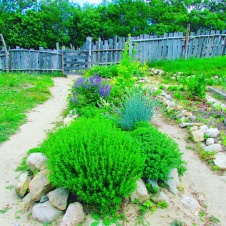 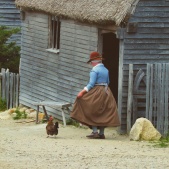 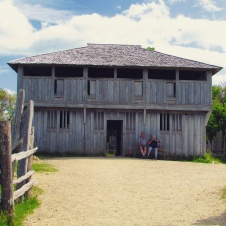 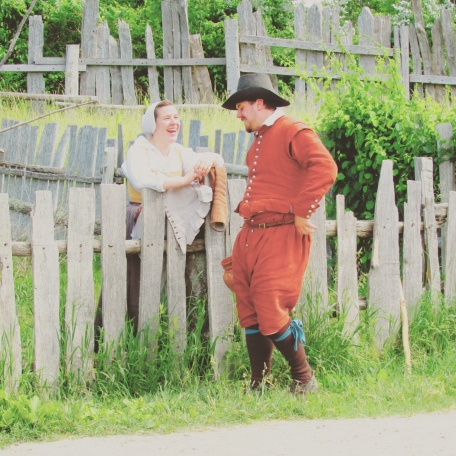