Camp Nanowrimo is going well-ish.  My word count has exploded, but the point was to write 4 whole short stories (and not 50,000 words), so I’m feeling a little behind.  The Golden Apple story went like gang-busters for a while but seems to have stalled out.  Brian and I discussed it this weekend, and I think it’s because the About is more in line with WWII than the Great War, and so it doesn’t quite fit.  Also, needs more Greek Gods (which could be said of everything, really). 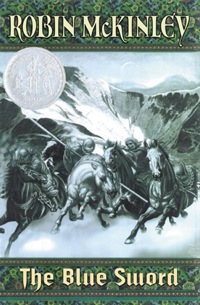 The Blue Sword, by Robin McKinley:

I have long been a huge fan of McKinley’s The Hero and The Crown, about an outcast of a royal woman, Aerin, who experiments with a non-burning salve used to fight dragons, and ends up being the savior of her people (along with a busted-up war horse).  I hadn’t read The Blue Sword, though I knew it was considered the sequel.  It wasn’t available on kindle until fairly recently, and isn’t available in most stores.

I found it, though, at a little used bookstore by the train station where I pick Brian up some days.  I bought it immediately and read it so fast.  Best find ever.

It’s about an orphan, Harry Crewe, who moves to be near her brother at a military outpost in the desert.  When a mountain king comes to the village to ask for military aid, his second-sight tells him to kidnap Harry and take her with him back to his kingdom.  She comes into her own, becoming one of the kings sacred riders and besting the country at the sword trials.  She communes with Lady Aerin, falls for the king, and saves a country herself.

So, Harry Crewe makes me want to be a hero. 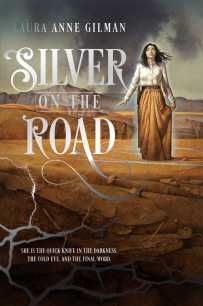 Silver on the Road, by Laura Anne Gilman:

Kindle has been recommending me this book for a very long time, in the way it recommends things I end up disliking.  I finally read the synopsis of it, and was sort of expecting it to be a worse version of Patricia C. Wrede’s Frontier Magic.  I figured that even if it was bad it would have interesting ideas.  I was VERY wrong.  It wasn’t anything like that at all, really, except in the traveling through the west theme.

And it was great.  My only beef with the book is that I will have to wait another 2 years (!!!) for the series to be finished.  Damn you, Simon and Schuster.  You always do this to me!

In this west, there are three parts.  There is the United States, there is the territory controlled by the devil, and then there is Spain, in that order from East to West.  The devil is undefined.  Is he evil?  Who knows.  But he does protect the territory, and he does make bargains for people’s souls.  He also runs a saloon, where main character Izzy grows up.

Izzy isn’t sure where she wants to go when she reaches her majority.  So she sells herself to the devil and agrees to become his left hand, touring his portion of the territory and doing… well, she doesn’t really know.  She has a guide to teach her the road, and they know there are monsters let loose to murder the populace.  That’s all she has to go on.

It’s a great book, super-exciting, and basically reminds me of a Deadlands game that has gone to print. Being out on the road seems great, if inconvenient sometimes.  Also bonus points for a book that discusses how women deal with periods (as in monthly bleeding) because I’ve never seen that before in fantasy.

I would like to travel the road with Gabriel and see the strange things in the west, although I’m not sure I’d agree to sell my soul to the devil to do it.

Isobel makes me want to be a villain.

So that’s it for the book reviews this week.  As always, happy reading!