I often write little essays and sketches of moments that I put away and then find later.  I was sifting through the files the other day, and found this one. It made me laugh, and then I read it to Brian and he cracked up and said I should post it.  I thought, since Valentine’s Day was yesterday, that I would.  So here you go: 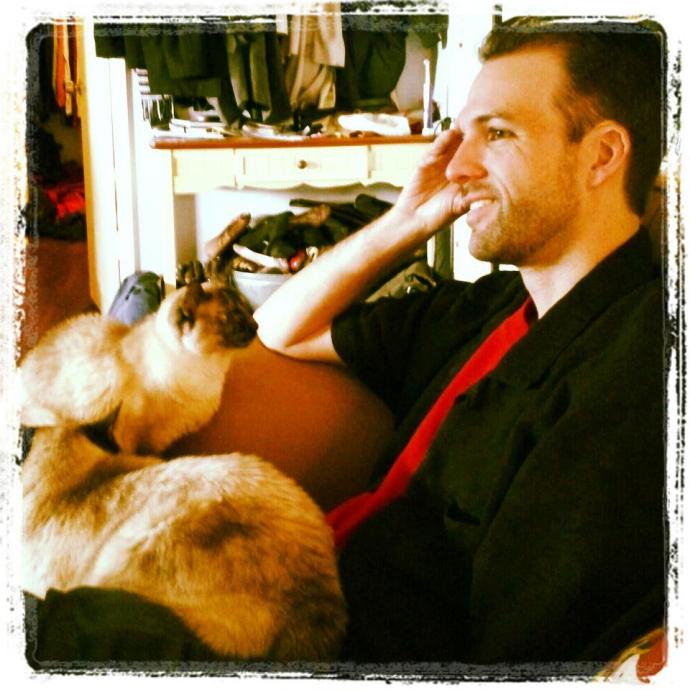 Sometimes he’s just so handsome sitting there that I can hardly help myself.  That’s how it was last night, he sinking into the plush couch in our living room, leaning forward, typing on his computer screen.  I have never been able to resist a writer.  He was only writing a new Dungeons and Dragons module, but it didn’t matter.  The greatest urge came over me to rub my face on his face.  There is something so compelling about the way he pushes his hand through his hair and leans back, lithe and deliberate.  When he realized I was watching, he looked up at me with a smile and made a place for me to sit next to him.

I tucked my head under his chin, and he took my glasses off.  He rested them on the pile of books next to him on the couch.

“How are you?” I asked, and then I kissed the underside of his chin.

“The module’s going well, I think,” he said.  He launched into an explanation that I hardly heard.   I could see every blade of stubble on his five-0-clock shadow, his long eyelashes, his deep brown eyes.   His jaw is so perfect, the pointed shape of it that gives him that crescent of a smile when he grins.  I thought about what his hair would feel like through my fingers; soft and stubbly in the back, until I rake a whole fistful of it near his crown, soft and longer.  He will roll his eyes back in sheer bliss if I do it, but I don’t want to interrupt him.

“I have the three main guys all written,” he said.  He held up three fingers.

I smiled, and then I leaned forward and kissed the third finger.

“No, no… you just kissed the Troglodyte cleric,” he said.

I grinned, nodded, and then kissed him near his ear.

“They have a stench, you have to make a fortitude save to get near him.”

I kissed him on his cheek.

“You can’t just go around kissing Troglodyte clerics you know,” he said.

I kissed him on the mouth, and when I pulled away we were both laughing.

“I’m on a roll tonight,” he informed me.