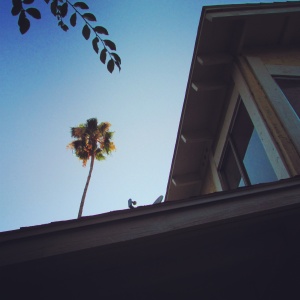 We have officially moved in. The house is so quiet, and there is an amazing view from my bedroom window of bushy tree tops with palms rising above them, silhouetted black in the darkness.  The huge July moon peaked from behind patchy clouds last night, leaving a silver aura in the sky.  The mountains are ever present in Redlands, too.  I will round a corner and find myself staring at a vast orange grove, the brown foothills in the distance disappearing to become layers of craggy purple on the blue sky.  At night, the foothills light up like fairy dust.  I predict that I will love this place so deeply in no time at all.  I’m already infatuated.

I’m a total wimp these days.  I used to swing around 30 pound Female Court skirts on the Electrical Parade every night (those wires are heavy!), and then walk a mile or so along the parade route to make sure all the lights were chasing, not blinking, with more heavy lifting waiting at the end.  I am that hardy girl no longer.  This weekend almost killed me.  My back ached with a cold, hollow pain that is so much more than muscle fatigue.  My feet throbbed enough that it woke me up in the middle of the night with a frustrated sigh, which then also woke Brian up.

“What’s wrong?” he asked as I threw my head against the pillow.

“My feet are just throbbing,” I said.

He pulled my feet from under the blanket, drowsy and lazy, and let me drift in and out of sleep as he massaged them. They stopped throbbing. Things like this are why he gets major good husband points. It would have been a good night’s sleep if it weren’t for the nightmares of floating boxes and dire home repairs.  Oh the joys of homeownership…

The cats are also being awesome.  They have never had a house with stairs and they are slinking up and down as if they are sure to be dive-bombed by something nasty, out in the open like that.  They often yowl a satisfied call to the night, but last night they meowed soft loneliness at our bedroom door and didn’t stop until dawn.  When I went downstairs to get a drink from the kitchen, Amy followed me.  Five minutes later, Annie realized that she was alone.  Upstairs in a strange house.  She started crying again, from the fluffy place where she had been cleaning herself on my bed.

“Hey, crazy,” I yelled at her.  “We’re all down here.”  I made kissy noises, and she came trotting down the stairs, the look on her face wide eyed until she saw us.  Then, she became very intent on grooming that tail.

She’s cool.  She doesn’t need company to feel secure at all, obviously.

They both looked at me in horror when I said “goodbye cats and kittens,” and closed the door on them to go to work this morning.  I’m sure they’ll survive.

As I’m sure we’ll all survive, and thrive, in this new place and this new lifestyle. I look around every morning and think “I can’t believe I live here!” I think that’s a good sign.