Sometimes I forget that I do this, but I often write little snippets of essays that aren’t really for anything.  Then I save them on my computer and forget they exist.  I went through a pile of them yesterday (if computer files can be a pile) and I found a bunch of things I really like, such as this one.   My cousin Courtney got married last year and Brian and I spent several days in Vermont.  This is what I wrote the morning of our first day there: 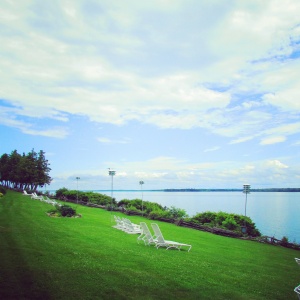 We are in Vermont now, and it is so beautiful.  It is like everything I remembered from my childhood in Maine, only more so.   If it were feasible for me to move in immediately, I would do it.  The plane ride from New York was especially gorgeous.  I looked out the window, half hoping to see the green tarnish of the statue of liberty out the little plastic oval.  I didn’t.  Instead, I saw a long beach stretching as far as the eye could see, tan and slim.  Breakers beat at its shore, even from so high up as we were.  The tan length of it disappeared in a haze at the curve of the earth, peopled by fluffy clouds over our silver wings.  The clouds took over the view, collecting one by one until they obscured everything, and then separating apart to reveal the deep green underneath.  We soared over farmhouses like tiny train models in the middle of lush forests and hundreds of pools of water.  A wide blue river wound to the north.

It was better once we landed.  As soon as we left the airport, I smelled it.  Green; the kind of thing that is grass clippings and clover and the hidden sweetness of running across the lawn barefoot in the summer time.  Beside the airport were the kind of houses I remember in my childhood, their muddy white clapboards rising from thick bushes as if they grew and solidified in the scrubby lawn.  This is the kind of house Uncle Earl had, when we ate blackberries from the thicket in front of his house.  He fed us blackberry pie for dinner and taught us about chickadees, the state bird of Maine.  This is the kind of house Grampy had, with the bed in the guest room not quite a double and more than a twin.  They forgot one night when we came to stay that it wasn’t a regular double, and my husband and I spent a night under the white tufted coverlet trying not to elbow each other onto the floor, too polite to remind them.

We arrived at cousin Courtney’s to enthusiastic hugs and watched the humid day slip away on her back porch.  I listened to Uncle Dave tell jokes, throwing his head back to laugh, and thought how much he reminded me of my mother, raking his fingers through his hair.   And then the patter of warm rain fell around us on the screen porch.  And then we went to bed.