Things I Learned This Week:

Foreign countries are foreign, even when they look and feel the same at first.

They don’t stamp your passport when you go to Canada, they just look at it.

Brian and I need to move east.  Maybe.  If we can handle the weather. Maybe.

Cousins who used to be just kids grow up to be some pretty amazing people.  It’s pretty great when you realize you’d voluntarily be friends even without the family connection.

I’m maybe more of a feminist than I thought, and I might be ready to declare it to the world.

There is no one I’d rather be trapped with on the never ending layover from hell than Brian and his scruffy face. 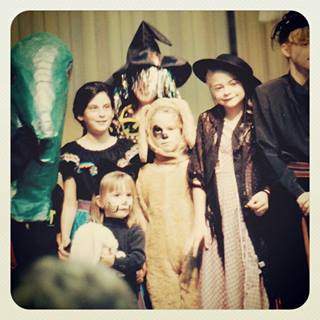 From the Music School Halloween Recital. Left to right: Jennifer, Taylor, my sister, me.  I’m about 12.

It is strange how moments from your childhood can engulf you, and suddenly you are fifteen again.

When I was fifteen, I babysat for Taylor and Anne every Tuesday night.  Christine, their mother, had been my piano teacher since I was four and was also one of my mother’s best friends.  Tuesdays were full of board games, homework, amateur cooking exploits, movies.  I cooked dinner from the hall bedroom for months when Christine had the kitchen redone.  I typed out Taylor’s handwritten English assignments so she could complete her math homework and get to bed at a decent time.  I played endless games of Harry Potter Clue with Anne.  The night usually wound up with a fight over whose book I would read aloud from.  If I did voices, we laughed so much that my breath evaporated and I couldn’t continue.

When I was fifteen, my mother had trombone students.  My sister and I would hibernate in the back of the house and try to ignore the loud hoots of sound coming from the living room.  “How can you stand it?” asked a boyfriend of my sister’s, long after.  We just did, it had always been a part of our life.  When Claremont Community School of Music had events, my mother would drag us along.  The school rented space from a small and low concrete strip mall.  Sandy, another good friend of my mother’s, would always be there, and so would Christine.  Sandy would bring her daughter Jennifer, who was fast friends with my sister.  Inevitably, we were the only children at the event.  There was a small and pink Baskin Robbins at the front of the strip mall.  The five of us would eat ice cream, sip water, and laugh in the middle of that pink island in the night while we waited for our parents to bring us home.

My parents liked having parties at our sprawling tract house.  Summer nights, Sandy and her husband Art, Christine, Taylor and Anne, sometimes Jennifer, would come over to the house.  My father would cook something fancy and we would eat in the backyard under the stars.  Mass quantities of wine was consumed by the adults.

Taylor graduated from college last weekend, and yesterday was the party.  It was a backyard barbeque of epic proportions.  Round folding tables and chairs were spread with purple and yellow tablecloths for the school colors.  The event was catered by her father’s gourmet restaurant.  There was even a bearded man with a microphone in the corner playing guitar.  A lemon tree dangled yellow fruit over the tables.  Lush plants overflowed their field rock walls, spilling onto the island of grass in the middle of the yard.  It was just as it had been when I was fifteen, only more so.

I joined my mother and stepdad at a table in the corner next to the glossy leaves of a camellia bush.  Sandy and Art sat with them.  Jennifer pulled a chair over, and then Anne.  Christine was next, and Taylor migrated our direction for a while.  We ate beef brisket and cupcakes with metallic sprinkles.  The afternoon turned to dusk around us.  I hadn’t had an afternoon with these people in years, and it was just like it had always been.  I was not turning thirty one in a week and a half.  I forgot that I had a husband at home in the middle of a kitchen re-do.  I was a daughter, a babysitter, a piano student, a teenager.  For a brief four hours, I was fifteen again.

Too bad it didn’t last any longer than that.